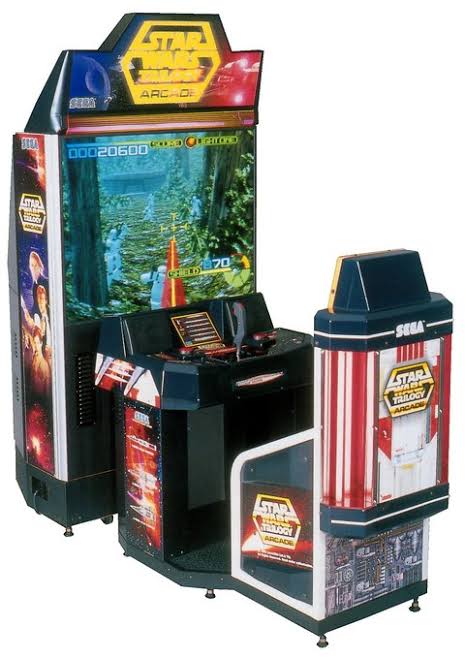 one of the most sort after games…. STAR WARS TRILOGY is now available for hire real sound from the movie ,jump in the seat and head to outer space -shoot down the enemy fighters you will feel like you are in battle  space  -book today TROOPERS and may the force be with you my friend.

The Star Wars mission, Yavin, is all space combat, with you piloting an X-Wing. In the first stage, you confront a multitude of TIE Fighters; in the second stage, you must destroy the first Death Star.

The Empire Strikes Back mission, Hoth, begins with you piloting a snowspeeder; you must shoot down AT-STs and Probe Droids, and assist your squadron to destroy AT-ATs. The second stage is a first-person shooter; you move through the Rebel Base, defending against snowtroopers and Wampa until you reach the Millenium Falcon.

The Retrun of the Jedi mission begins with a Speeder Bike sequence; you must attempt to destroy the Imperial bikes that you encounter. The second stage is a first-person shooter; make your way to the Imperial Bunker to destroy it. In a third stage, you take on an AT-ST with nothing but a blaster.

The first bonus stage, after your second mission, is a lightsaber phase where you must block blaster shots from Boba Fett.

The second bonus stage, after your second mission, is a lightsaber battle against Darth Vader.

After the Darth Vader duel, you enter a space combat mode, again flying an X-Wing to destroy the second Death Star.